To select your favorite Christmas group, use the dropdown menu that appears in the navigation bar to the left when you hover on Christmas Collection.  More subcategories and items will be added over time, so check often.  Enjoy!!

I’ve selectively collected Christmas items for decades.  As I downsize my personal collections, I’m offering them to you, so that they will all find appreciative homes.

My focus for this collection is mostly items from the 1960’s and prior.  Once the Santas began looking solemn or almost angry, especially in the 1980’s and forward, they lost their appeal.

I don’t care much for “Father Christmas” or seeing our Santa dressed up in a purple velvet robe with moons and stars on it.  Those items are for gatherers, not collectors.  Gatherers are gourmands; collectors are gourmets.

The Santas range from tree ornaments to crib toys, moving friction toys to windups to battery operated.  Some are table pieces such as salt and pepper shakers, some are candy containers.  What they have in common is that they are all vintage, all in good condition and all happy about being Santa.

I also collected tree ornaments.  My focus there was always shapes and ornaments with movement, like the spinners you see in the photo to the left.

Also included in the collection are grapes, horns, figurals, shapes that defy one-word description and yes, even some ball ornaments.  My rule on ball ornaments is that they must be equal to or in excess of 4″ diameter and that they pre-date the 1960’s, because up until that time, they were US made or made in Poland, Czechoslovakia, Germany and Japan.

After that, ornaments became heavy and clumsy, especially in the 1990’s and early 2000’s, when the market became saturated with ceramic “villages” and rip-offs of the old Shiny-Brite ornaments that were so poorly executed by their big-name plagiarist that the only way they were popularized was to demand for them a ridiculous price, thereby appealing to those whose lack of taste is fueled by the idea that the more it costs and the more often it is seen, the more impressed their friends will be.

Even if it isn’t meant for the tree or for the holiday table, if it is Santa, there’s a chance that I have one or more.  Several trays will be offered; mostly Coca-Cola Santas.

There will be blow-molds of Santa, there will be electric candelabras, tree-top angels and other tree toppers.  There will be lights, pitchers, things with no purpose other than to be whimsical, even some children’s books and squeaky toys! 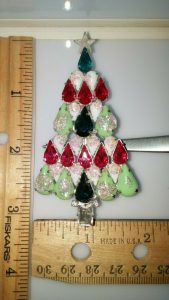 There will be a small group of Christmas themed jewelry; almost entirely pins or brooches.  Most are 1960’s and prior.