All of my glass items are in excellent to pristine condition unless otherwise stated in their descriptions.

All pictures appearing in collages are saved separately on my computer, should you require them.

All measurements are approximate to within 1/4″ +or- 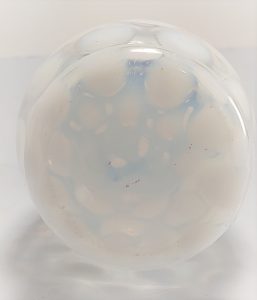 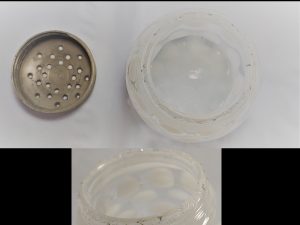 Here is a sugar shaker for you; one of the more difficult items to find, as they are just about all collected up.  The mouth of the shaker is quite rough, as seen in the photos (thus the low price) but as you will most likely display it with the cap on, this should not present much of a problem.  The Coin Dot, or Coin Spot pattern is clearly defined, the body of the shaker is in excellent condition, the cap is very heavy and is easily applied and removed.

This will be a wonderful addition to your collection.

• 3″ at widest point across 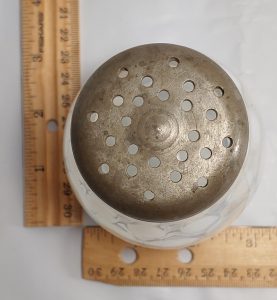 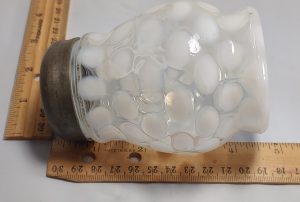 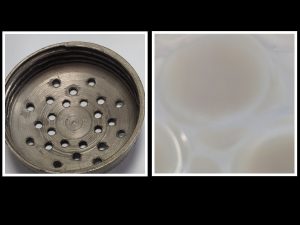 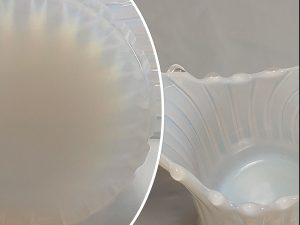 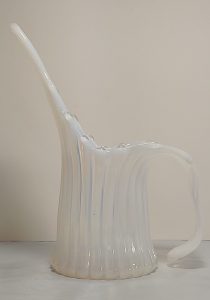 This is a lovely whimsy piece.  The original mold was obviously intended as a vase, but the snap-up boy who took it from the mold had other ideas, as you see here.  The bottom glass is heavier and gets thinner and lighter where it was pulled, separated, bent and formed into this unique pitcher shape.  What was hardest to capture in the photos is the beautiful fire of this piece.  It has the expected reddish, orange-ish fire along the edges, but between ribs there is purple, pink and a hint of blue, depending on the angle of light.  The ribs end at their tops with smooth, rounded, almost-hobnail effects.

Has a bit of dust, but no damage; wonderful, one of a kind addition to your collection. 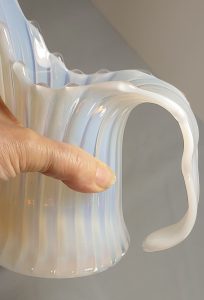 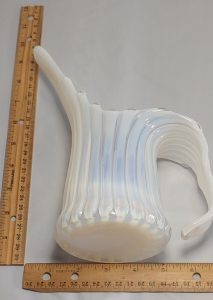 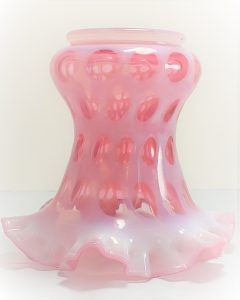 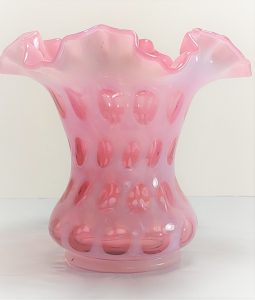 Almost every glass company did a Coin Dot, Coin Spot or Thumbprint pattern and at times it can be difficult to say which company made which vase.  That is true in this case as well, as it is old enough to be unmarked.  You can tell by the slightly spiral turn of the spots that this is not a recently produced piece from the 50’s or later; this was taken from a smaller mold and stretched and crimped while it was still hot.  During that process, it was common for the vase to twist slightly, generating a pattern that was slightly spiral.  It is obviously hand made, so that dates it to previous 1930, which is the end date for hand shaped glass that was mass produced in the USA.   There are never two that are identical and as it IS a hand shaped piece, it is lighter in weight than more recent productions, where the vase and its mold are exactly the same size, making a heavier and in my opinion, clumsier end product.

The vase is flawless, to the best of my ability to find any sort of damage whatsoever.  Color is even and strong all over and while there is no mineral deposit in the bottom from standing water, there IS a bit of dust, which I will leave for you to deal with at your leisure.

• 6¾” at widest point across ruffles 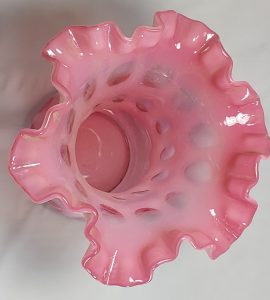 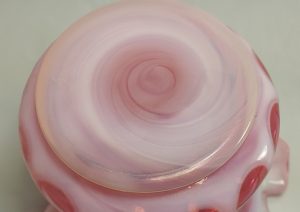 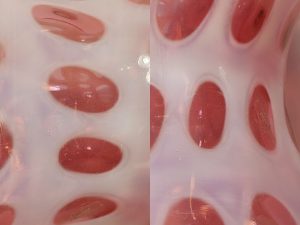 It is pink milk glass, gold rim, hand painted with a garland of roses and leaves.  This bowl is most likely Fenton; the piecrust ruffles and general aspect says that, but it’s not a certainty., as almost all glass companies made a hobnail pattern at one time or another.  As nearly as I can ascertain, there is NO damage to this bowl; not even to the garland of hand painted flowers.  The hobnails are pointed, rather than just round bumps.  SOLD 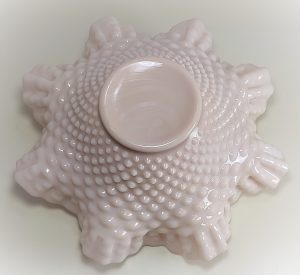 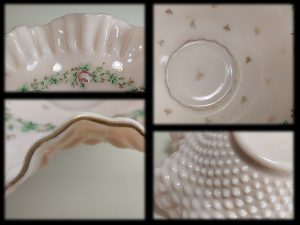 This is Cambridge’s Crown Tuscan glass footed shell with the pattern dubbed Charleton Rose.  The color tone is peachy-pink, slightly translucent. It is entirely unharmed, with only the slight suggestion of gold loss on some areas of the stubby feet, but that may be original, as these were never painted to look absolutely identical.  SOLD 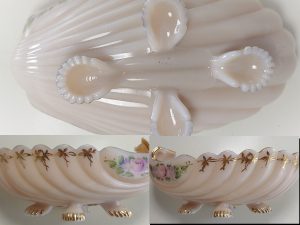 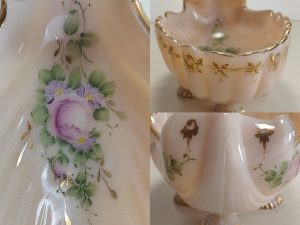 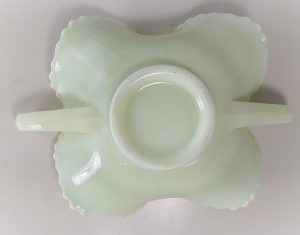 Here is a Fenton Bonbon in the Lotus & Grape pattern.  It is in the greenish custard glass appropriately nicknamed green custard and has green “stain” detailing.  As you can see in the right lower photo, the glass is UV reactive and glows nicely when confronted with a black light.  Bonbon is in lovely condition, with no chips or cracks. 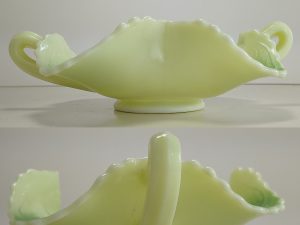 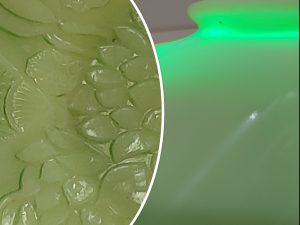